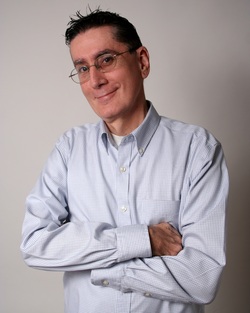 Did you ever wonder where comedians come from? What kind of twisted psyche does it take to make a person want to continually go up in front of a group of people with a chance they might fail and experience a result many people fear worse than death?

Some say the comic perspective is formed in a troubled or challenged life. Humans laugh as a coping mechanism for adversity and the comedian's dramatic efforts are their attempt to control this elusive state.

If challenge and adversity are fertile ground for the comic, then Stu Baker has plenty enough fertilizer to be really funny.

At the age of three, Baker was diagnosed with Muscular Dystrophy, a progressive neuromuscular disease brought to America's consciousness each labor day by the Jerry Lewis Telethon. Is this funny? Stu Baker thinks it is. Now 56, he tells audiences he's one of Jerry's kids. The audience laughs. Stu moves on. Let's move on, shall we?

But frequent detention did not discourage Stu Baker. At a very young age, he developed an entire stand up comedy act complete with references to President Eisenhower and Adlai Stevenson and "Milk is up to 27 cents a gallon? What's up with that?" He had dreams of being on the Tonight Show with Steve Allen ... then Jack Paar ... then Johnny Carson. And now they're all dead and with the untimely removel of Conan Obrien from the Tonight Show, it makes him worry about the welfare of Jay Leno.

Somewhere along the line, he developed the bad habit of procrastination. He decided he'd get around to being a comedian later and installed a snooze button on his snooze button. He also began to have an additional recurring dream; that he would someday become a Facebook whore. He didn't know what a Facebook whore was then. (He does now.)

Before his now-famous comedy career, Baker got a degree in Psychology and immediately got work as an data manager in an engineering company (don't ask). He also worked as a professional musician, owned a recording studio, worked as a recording engineer and record producer, founded an independent record label and hosted a number of radio programs as a DJ in the Phoenix area.

For the last seven years he has returned to his stand up dreams and attributes his recent success to two things, 1) The principal is now dead too. 2) Stu Baker is a Facebook whore 3) He is funny. See? He listed three things instead of just two. That's comedy!